The new year is upon us, and that means the closing of LMC's centennial. Somebody cue Auld Lang Syne, please.

In this week's video post, LMC Executive Director Jim Miller explains how a poignant moment this fall clarified just what has made us strong over the past 100 years. Here's a hint: It's not a building, a law, or even some hearty home cooking, although that didn't hurt one bit.

He also has a pretty time-tested notion about how the League should steer our course over the next 100 years. (Here's some more forward-thinking ideas from LMC President Shaunna Johnson while you're at it.)

It's been quite a century for the League of Minnesota Cities. We hope you enjoyed the ride in 2013 as this blog looked back on LMC's history—we certainly have!

See you "next year!" Stay tuned in 2014 for a new look and fresh content right here at www.minnesotacities.blogspot.com.

Posted by MNCities Blog at 10:27 AM No comments:

Happy Holidays! A Town Crier from 1932 has a Message for You 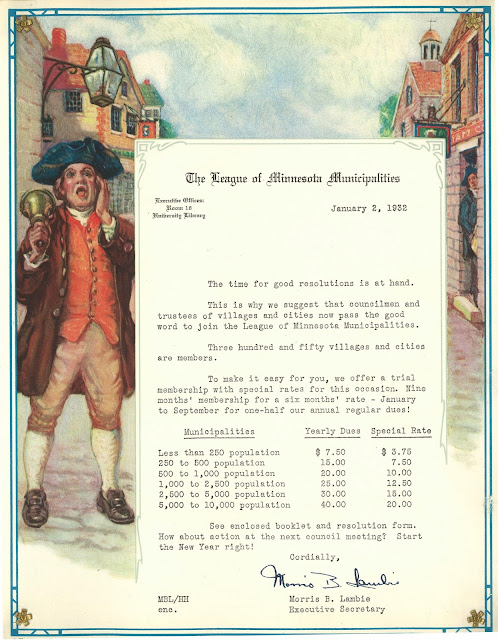 Or maybe they do.

—We don't really want to know.

Regardless, happy holidays from the League of Minnesota Cities!

Our wish for you this season:

May all your
town criers be rosy-cheeked
and full of
good news!

And while our membership fees have changed a bit since the Great Depression when this little mailer was crafted, we'd like to think that sticking with the League in the new year is still a a fine way to "start the new year right!"

What's your city or organization's "resolution" for the new year?

Posted by MNCities Blog at 12:56 PM No comments:

Say it ain’t so! The centennial year is coming to a close, and what a year it’s been. Let’s take a look back at how we’ve honored the past 100 years: 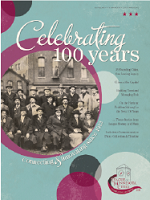 Keepsake Booklet
League staff swam through boxes of archived files, knickknacks, and photos to write a story that has been a century in the making. The result is the Celebrating 100 Years centennial keepsake booklet. Each author dug deeper and found the personal tales behind topics, including the League’s split from the University of Minnesota, the biographies of our executive directors (movers and shakers!), the pioneering formation of the insurance trust, and the founding cities (listed at the bottom of this post).

Special Celebration
What would a centennial be without a celebration? On June 19, hundreds of civic leaders past and present gathered at the Union Depot in St. Paul to kick off the annual conference. Besides breaking bread together and listening to special guest speaker Garrison Keillor, everyone also gathered to make a little piece of history and re-create a photo that was taken at the League’s original annual conference. 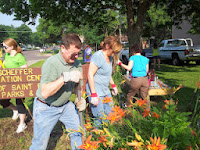 League staffers don’t take for granted the LMC building or the surrounding neighborhood in St. Paul where we are lucky enough to work. To give back centennial-style, League staff partnered with the Blooming St. Paul program to dig out an overgrown garden at a local rec center and replant it with hardy perennials to provide a scenic spot for neighborhood kids—you know, the leaders of the future. 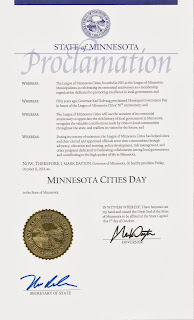 Speaking of those future leaders … dozens and dozens of students (age 7-12) submitted handwritten essays about what they would do if they were mayor of their cities for a day (including helping senior citizens, installing new sidewalks, and cleaning up parks). Rest assured, the future of our cities is in good hands—watch for the winning entries in the Jan.-Feb. 2014 issue of Minnesota Cities magazine!


A Day of Our Own
To help mark LMC’s 100th year, Gov. Dayton declared Oct. 11, 2013 Minnesota Cities Day! His office signed a special proclamation that read, in part: The League of Minnesota Cities will use the occasion of its centennial anniversary to appreciate the rich history of local government in Minnesota, recognize the valuable contributions made by cities to local communities throughout the state, and reaffirm its vision for the future. We're thrilled he recognized the hard work and dedication of our member cities—thank you, Governor!

New Blog
There there’s the matter of this little blog you’re reading right this moment. We’ve spent the year digging up gems from the history of the League and Minnesota cities, and had some fun doing it! A few of our favorite posts include a historic brush with First Lady Eleanor Roosevelt, talking with public works staff about the Halloween Blizzard of ’91, and learning about women's roles in the League over the years. We hope you’ve enjoyed all of this as much as we have!

There's No Place Like Home—The League's Offices Through the Years

Over the last 100 years, the League has called approximately six different places home. Here are some quick snapshots (literally!) of those half-dozen buildings where we’ve hung our hats: 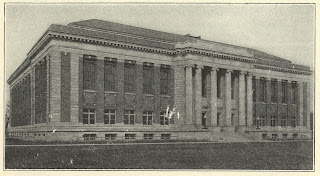 It all began at the University of Minnesota, where the League's offices were housed in Walter Library (today home of the Science and Engineering Library and Digital Technology Center). 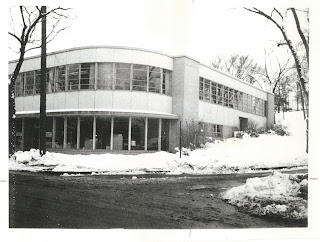 League staff spent five years (from approximately 1969-1974) in this building at 3300 University Ave. SE in Minneapolis, once again on the U's campus. This piece of retro architecture still stands today! 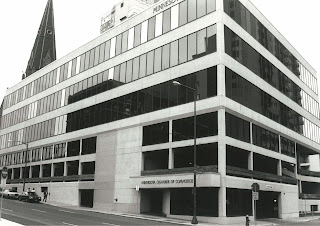 After the split from the U in 1973, the League moved into the Hanover Building at 300 Cedar Ave. in downtown St. Paul, also home at that time to the Minnesota Chamber of Commerce. 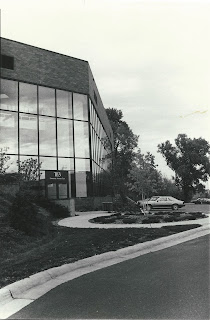 In 1982, the League moved to 183 University Ave. E. in St. Paul (just over one mile from LMC's current offices!). You may recognize this corner as part of the Gillette Children's Hospital campus. 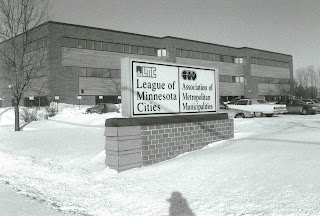 The League's fifth home was at 3490 Lexington Ave. N. in Shoreview, where building space was shared with the Association of Metropolitan Municipalities.


And now—drumroll, please!—we've arrived at the League’s current home. Located at 145 University Avenue W. in St. Paul, here is a "before" of the space at Rice and University in the early 1990's: 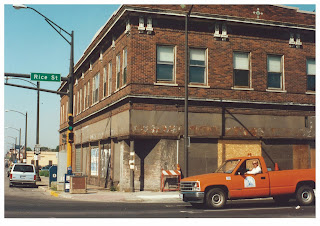 And here is an "after" of the building the League constructed in 1996 and calls home today: 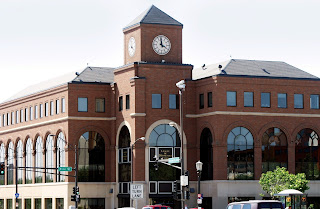 Conveniently located kitty-corner from the state capitol, it's just a brief walk there if you are coming for any of the 2014 legislative session. Please know that our home is yours, and you can park in LMC's lot for free (just be sure to sign in at the front desk!).

Or coming in 2014, you'll even be able to take the new light rail directly to the capitol grounds. Here's a shot of a recent "test-drive" on the tracks: 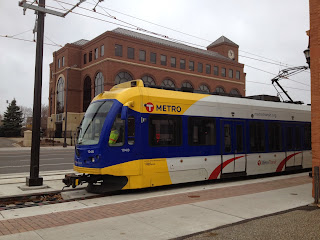 Bonus tip: no matter which way you arrive, watch this fun video tutorial and learn how to navigate from the League's current building over to the state capitol (as well as what you can expect when you get there): www.lmc.org/captour

The bottom line is: the League is your organization, and we’re happy to have found a good home so we can be here when you need us!

How many of the League's buildings have you been in? Tell us in the comments!

Posted by MNCities Blog at 12:44 PM No comments:

The Dec. 7, 1941 attack on Pearl Harbor triggered the U.S.'s entry into World War II—as well as a massive change in the daily routine of municipal government.

In a letter to members in the January 1942 issue of Minnesota Municipalities magazine, W.J. Kirkwood, mayor of Crookston and League president, addressed the sudden transition, including this nugget of can-do spirit in the face of an uncertain future:

Let each of us do his part, and let each municipality and each department of every municipality so arrange and so carry out its functions that our municipal governments may smoothly and efficiently fit into America's war efforts. Only in this way can the interests of democracy best be served at its grass roots—in the villages and cities of this great nation. 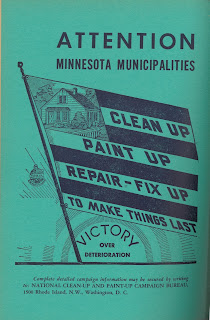 Cities and the League began to swiftly pivot their daily activity around the war:

The League offices were not immune. For example, research assistant Howard Kohn was called up on Oct. 1, 1942, just three months after his hire date. Replaced in November by Bernard Moritz, the position was again left empty when Moritz was called up in December.


League lawyers were kept busy evaluating war time considerations such as the legality of cities investing in war bonds, and what emergency powers would be available to cities in case of invasion or attack (can a city sell food and fuel if no business is operational enough to do so?). 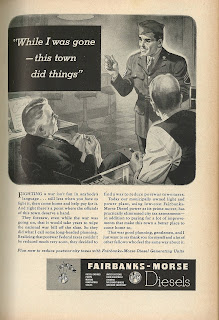 When the conclusion of the war finally appeared on the horizon in late 1944, cities again prepared for transition, making plans for the return of veterans, mobilizing public works projects that had been put off, acquiring surplus goods, and building war memorials.

But the impact on Minnesota cities was felt again in April 1945, when a lingering ban on large conferences issued by the Office of Defense Transportation forced the cancellation of the annual conference for the second time in League history.

To cooperate with the ban's intent to limit gas usage across the country, the League instead held board elections that summer via mail ballot and delivered a robust series of Regional Meetings later in the fall—coincidentally timed with the official surrender of Japanese troops and the closing of yet another dark chapter in American history.

Do you know how WWII affected your city's operations? Share your city's history in the comments.


Posted by MNCities Blog at 8:39 AM No comments: