Hi there, my name is Cathy Sorensen, Blaine city clerk. I also serve on the LMC Improving Service Delivery Policy Committee and I’m the chair of the LMC Elections Task Force. After finalizing all the tasks involved in a busy election cycle I wanted to share a little about what is involved in administering an election and some of the behind-the-scenes tasks that most members of the public are not aware of.


From the to-do list of an election administrator:
•    Hire and train great election judges … and tactfully let some go!
•    Secure polling places.
•    Test election equipment for accuracy.
•    End-of-day accepting, sorting and filing of ballots & applications.
•    Opening and preparing absentee ballots for tabulation.
•    Pack election supplies: everything from pollpads, rosters, and ballots to pens and paper clips.
•    Tally write-in votes for school and other special districts that include Mickey Mouse, Donald Duck, and others that can’t be mentioned here.
•    Work all day Saturday before election day for absentee voting and packing supplies for the polling places! Some jurisdictions are open on additional weekends too.
•    Coordinate public works deliveries and pick up of equipment and materials for the polling locations.
•    Unpack supplies and regroup for the next election.

Three early voting facts
Three facts about early voting that residents (or even city officials!) may not know:
Are changes ahead?
Each year, city officials from across the state serve on the LMC Elections Task Force through LMC to recommend improvements to the system. Learn more about the policy development process here.

And last but not least, thank you, colleagues across the state, who help make elections happen!

Posted by MNCities Blog at 12:10 PM No comments:

How One City Beat the Winter Doldrums

And other stories from the Nov-Dec 2018 Minnesota Cities magazine

Let’s face it: Winter in Minnesota can be pretty bleak. Well, Duluth leaders decided to do something about that last year, when they enticed more than 1,800 people to come out and play in the middle of February.

The city’s winter festival included a sledding hill, fire spinners, an ice track, fat-tire bike riding along the Lakewalk, live music, and more. And sure enough, people came out of hibernation, despite sub-zero temps. Even Champ, the University of Minnesota–Duluth mascot, loved it! (The proof is in the picture.)

Duluth put this winter wonderland together in only three months. How’d they do that? With a lot of help from their friends, as it turns out. You can read all about it in the Ideas in Action article in the November-December issue of Minnesota Cities magazine—hitting mailboxes this week! (Here’s a secret: It’s available online now at www.mncities.org!)

In addition to this winter celebration story, you’ll find a variety of other articles, including:

Affordable housing. Cities all over Minnesota are facing a housing crunch. It’s not a Greater Minnesota issue; it’s not a metro problem. It’s everywhere. Find out how some cities are addressing it in The Ongoing Quest for Affordable Housing. 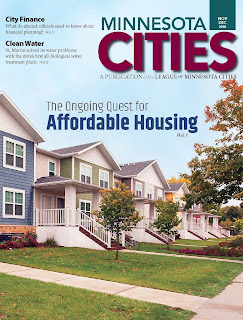 City finance. Solid finances are the key to your city’s success. So, be sure to read these two articles with tips for keeping the city financially stable: Financial Planning for Elected Officials and Measure Up! Key Metrics to Keep Your City in Good Financial Shape.

Clean water. Maybe it’s not the most exciting topic (or maybe it is for you!), but residents in St. Martin were thrilled when the water coming out of their taps was no longer orange. Read Focus on Small Cities to find out how this city of 344 built the first all-biological water treatment plant in the state.

You can also check out From the Bench for summaries of recent court cases, St. Paul to City Hall for LMC Executive Director David Unmacht’s thoughts on what makes a successful city staff, and Two-Way Street for two cities’ experiences with Regional Safety Groups.

One Way Minnesota Says 'Thank You' to Veterans

Life is full of firsts, although it is comfortable to suggest that the older one gets, the less of them there are. (And if you are wondering if I have a bucket list of ideals and aspirations in pursuit of dreams not yet fulfilled; the answer is no, at least not yet!)

Well, I had a first this fall when I, along with dozens of mayors and city officials from across the state, attended a National Guard ceremony to honor the Rosemount-based 34th Red Bull Infantry Division troop deployment. Around 650 men and women of the 34th Red Bull Infantry Division represent approximately 185 communities from across Minnesota. Each person in the division is leaving their families, jobs, and communities to begin a 10-month deployment in the Middle East with an initial stop in Fort Hood, Texas for training.

No doubt it is an anxious time for soldiers and their families. To ease their nerves and to create positive memories, a group of volunteers has made deployments in Minnesota something to remember. The work of around 200 volunteers from an organization called “Serving our Troops” came together to serve a delicious meal to the soldiers and their families in conjunction with the ceremony. I, along with League President Heidi Omerza and 2nd Vice President Brad Wiersum, had the honor to work one of many food lines serving up a classic steak dinner at the event on Sept. 30. Over 5,000 steaks were served.

Even more city officials representing many of the communities these soldiers are leaving behind for their deployment also helped out at the event. To my amazement, volunteers from Serving our Troops and their community partners have served over 95,000 steak dinners since 2004. Isn’t that amazing!

“This is how Minnesota comes together to say ‘Thank You’—dinner with the family for 5,000 people,” noted Serving our Troops spokesperson and co-organizer, Pat Harris. “It was an incredible show of support.” Friends of the League will recognize Pat and his wife Laura, the League’s Event Manager, and who is also very much involved in Serving Our Troops..

I can attest to the truth of Pat's observation. It was an awesome experience; made even more extraordinary by the humbling thanks and expressions of appreciation the troops and their families offered to us as volunteers.

I was one of thousands of people attending and even I felt special, though the only service I performed revolved around steak. But the thanks is really yours and mine to the troops and their families for the personal sacrifice each is making for their state and country.

Learn more about Serving Our Troops

Career Fairs and LMC—Sharing Your Great Opportunities in Minnesota Cities


The League is adding a new skill to our résumé and setting up shop at a variety of upcoming career fairs to promote city employers, the value of city careers, and the great opportunities that our member cities can offer job seekers.

This work is in response to a call from city leaders to help address the challenge of recruiting for some positions within city operations, as well as your interest in having broader visibility among diverse candidates.

With your feedback we developed a good-
lookin' booth, plus handouts that introduce why city careers are a great way to make a difference in your community, how to use www.lmc.org/cityjobs and get started with NeoGov to receive job listings, and what candidates need to know about interviewing to help get their first impression right. Visitors to the booth can check out the jobs site and take the Discover Your City Superpower quiz too, depending on the event.

The goal is to prompt more qualified applicants to consider city job postings from across the state, and to leave a great impression about city careers with everyone else. This effort is consistent with some of our other projects over the past year, including our Discover Your City Superpower booth at the state fair, as well as a series of ads we ran on public transit for the duration of the fair promoting the jobs site.

Posted by MNCities Blog at 4:40 PM No comments: