Much Ado About Nothing: The Y2K Scare

Y2K. The Year 2000 Problem. The Millennium Bug. No matter what it was called, most of us can remember the rigmarole surrounding this potential disaster almost 15 years ago.

A brief refresher: There were major concerns that as the calendar changed from 1999 to 2000, computer systems around the world would crash. Why? Well, when computers were first created, memory was expensive—so space was saved by using two digits instead of four for the year (i.e. "84" instead "1984"). So the fear was that when the year turned to "00" (for 2000), the computers would instead think it was 1900, and everything as we knew it would crumble.

Predictions included worldwide power failures, a total breakdown of the transportation infrastructure (meaning food could not get to stores), and planes falling out of the sky. The most concerned of citizens stockpiled gas, water, food, and even firewood just in case electrical grids went down, running water ceased, and heating systems failed. 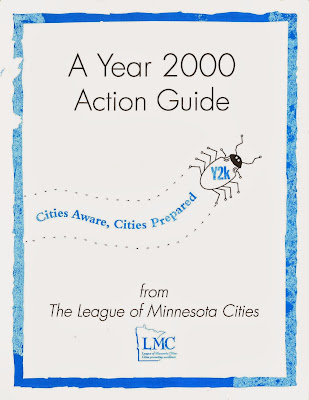 There were legitimate concerns at the local level, as well. Among the worries for cities:
-Would the pagers used by the city’s firefighters notify them of an emergency?
-Does the city have a planned response if water or wastewater pumps cease to operate?
-Would the city’s dispatch system malfunction when the century changed?

In addition, cities were distressed by the potential for liability and Y2K-related claims:
-What if there is a car accident because a traffic signal doesn’t work due to a Y2K problem?
-What if someone gets sick because the city’s water system malfunctions?

So to help prepare our members, in 1998 the League released a binder full of information entitled Cities Aware, Cities Prepared: A Year 2000 Action Guide.

Among its many recommendations, LMC suggested cities:

The League even had an employee designated as its Y2K coordinator.

Luckily, when the clock struck midnight and the world leapt into the 21st century—so too did our computers. Systems barely registered a blip on January 1, 2000, and life went on for both cities and concerned citizens as usual.

Ultimately, though, Y2K is a great example of how both cities and the League must always be prepared...even when the result is much ado about nothing!

What do you remember about the Y2K scare? Tell us in the comments below…

A Recipe for Good Government—Centennial Style

A dash of hospitality, a tablespoon full of tradition, and a heap of enthusiasm all went into the pot for this one—the one and only "Minnesota Cities Favorite Recipes" cookbook. This kitchen marvel holds recipes collected from member cities and friends to celebrate the League's 75th anniversary in 1988.

"City officials represent a diverse state. They come from every walk of life and from many ethnic backgrounds, which is evident in their recipes," says the Acknowledgments page. 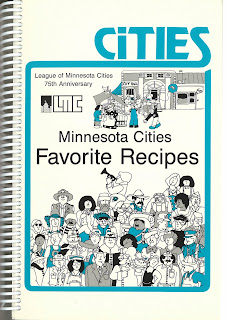 Along the way, city anecdotes and facts are sprinkled in to spice things up. For example, Vesta became home to the country's first electric cooperative in 1917. Lake City is officially recognized as the "Birthplace of Water Skiing."

And just in case you were wondering, the book DOES hold a recipe for good government, submitted by Mayor Roland Habedank of McIntosh:

Combine ingredients carefully. The citizens should be fresh, preferably without grudges. The issues should be pertinent, but not too spicy. It's very important to add as much of the last ingredient as possible. For the topping, combine dedication, concern, and the willingness to learn and communicate. The results are guaranteed a good city government.

We'd like to pass on more recipes from the 1988 archives. Here are two to help with all those leftovers!

Mix ingredients as listed. Put in a roaster pan and cover. Bake and 350 degrees for 1/2 hour. Serve on warm buns. Submitted by Fred Cole, mayor of Easton.

What's your recipe for good government? Let us know in the comments!
Posted by MNCities Blog at 7:30 AM No comments:

Know Your Audience: A Message from the LMC President

This blog has focused plenty on the history of Minnesota cities, so how about we shift gears for a moment to ponder how cities can be better prepared for the future? It all starts with knowing your audience, according to LMC President Shaunna Johnson ('13-'14).

Specifically, Johnson wants cities to gather information about their changing demographics—think baby boomers and millenials—and to think about how cities can prepare for declining revenue and increased demand for services.

Changes in how people live and work also pose an opportunity for cities to evolve. You know those public hearings? Johnson challenges city officials to consider how to adapt this important process to better meet the needs of citizens today.

Posted by MNCities Blog at 9:00 AM No comments:

Are you one of the newly elected from Minnesota’s 60 cities (or one of the League’s 10 member townships) that just held a municipal vote yesterday?

Or perhaps you are one of the 752 councilmembers or 197 mayors who was elected last year?

Either way, the League has resources to support you! For example, at the turn of every year, LMC holds conferences for those new to city leadership.

Beginning back in January 1957, the League partnered with the University of Minnesota’s Department of Conferences and Institutes to put on a Conference for Newly Elected Mayor and Councilmen on campus.

Some questions they covered then included:

-What are the limitations on council authority?

-What problems will your municipality face next year? The year after? 1980? (Editorial note: Isn’t it fun to think of a time when 1980 was still the semi-far-off future??)

-What are public relations basics for municipal officials?

While those conferences only lasted until 1970 (at which point there is a lull in both our records and collective memories), an updated version of the program entitled Leadership Conference for Newly Elected Officials was resurrected by the League beginning in 1987.

And while time has ticked by, many of the core issues around leading a city remain the same. Questions addressed at the conference today include:

-As a city council, what are we allowed (and not allowed) to do?

-Where can I find resources to help make sound decisions?

-How can I avoid common missteps, pitfalls, and negative press?

Newly elected officials also learn about finance fundamentals and legal responsibilities (like details around the open meeting law and data practices, to name just two). And last—but definitely not least—this conference has always been a great opportunity for the newly elected to meet peers in similar positions from across the state!

So if you (or someone you know) would like to attend the 2014 Leadership Conference for Newly Elected officials, click here to get more information and register now.

In the meantime, the League wants to congratulate all of Minnesota’s newly elected city officials!

P.S. - What if you can’t attend the conference—or perhaps just can’t wait for it? You’re in luck! The League has also compiled a whole host of helpful information at www.lmc.org/goodstart, a special webpage created just for the newly elected.