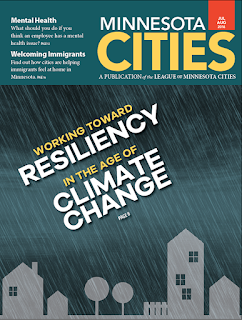 The July-August issue of Minnesota Cities magazine is online for your summer reading pleasure. The
top spot digs into how cities are responding to the local impact of global climate change, and how resilience can also mean stronger, connected, energy-efficient communities.

Move to a new country. Find a home. Learn a language. Make friends. Find a job. Yeah, that's a daunting to-do list. See how some recent efforts by Minnesota cities are helping immigrants make a successful transition to life in the land of Paul Bunyan and Babe in "Making Minnesota Cities Home for Immigrants."

See how Elk River and other cities have navigated the pitfalls of financing growing street repair costs by doing away with assessments and saying hello to a dedicated franchise fee program in "Ideas in Action: Elk River Finds Its Way to Smoother Roads."

Unfair labor practices, or "ULPs" to those in the know, are easy to define in law, but a little more difficult to identify in the real world. See why understanding these labor laws will become more important than ever next year in "Letter of the Law: Unfair Labor Practices—It's All in the Eye of the Beholder."

And as always, catch up on the latest court decisions that could affect your city's operations in From the Bench; learn about aging population, a tight labor market, and migration in Let's Talk with State Demographer Susan Brower; and check in with two city staffers on the topic of community gardens in Two-Way Street.
Posted by MNCities Blog at 5:53 PM No comments: 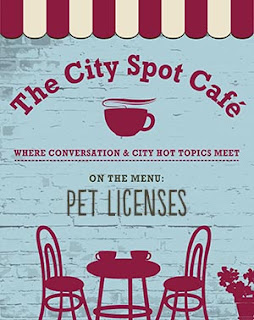 What you need to know about pet licensing right now, served up by the LMC Research and Information Service team.

Definition: A pet is usually a domestic or tamed animal kept for companionship or pleasure. A license is a permit from an authority to own a pet.

Plain-language translation: Cities have the authority to require that residents register their pets with the city. The licensing requirements are different in each city but usually require a small fee to cover the cost of administering licenses, proof of vaccination, and a tag to include on the pet’s collar to use as identification. Residents may need to obtain a new license every year or it may be good for the lifetime of the pet.

In the news: Traditional pet licensing of dogs and cats is pretty common and not usually so newsworthy. Many cities have recently applied some of the pet licensing principles to the keeping of backyard chickens in urban settings, which has attracted some attention. See Coon Rapids and Jordan for examples.

Pros: Local law enforcement often gets calls for dogs running loose, missing pets and the like. Having a licensing system often allows pets to be reunited with their owners sooner. Many cities that license require pets be vaccinated against diseases like rabies as a way to provide a healthier animal population. And, having an animal control ordinance often limits the number of pets allowed per residence as a way to control for health and safety of the community.

Cons: City staff time will need to be devoted to licensing pets, following up on complaints, as well as catching and boarding animals. Some cities have staff do all of these jobs while others have office staff issue pet licenses and contract with a third-party for the animal control operations.

League position: Cities should consider the pros and cons and make a decision that is best for the city with the available resources. If the city does not have a licensing ordinance, the county may have ordinances about licensing and regulating dogs running loose that apply to city residents. If there is an applicable county ordinance, the city clerk should be familiar with his or her responsibilities under that ordinance.

*This blog post has been edited to reflect that Farmington, Minnesota has not discussed backyard chicken ordinances. We regret the error.

This information has been compiled by Amber Eisenschenk, staff attorney with the League of Minnesota Cities. Contact: aeisenschenk@lmc.org or (651) 281-1227.