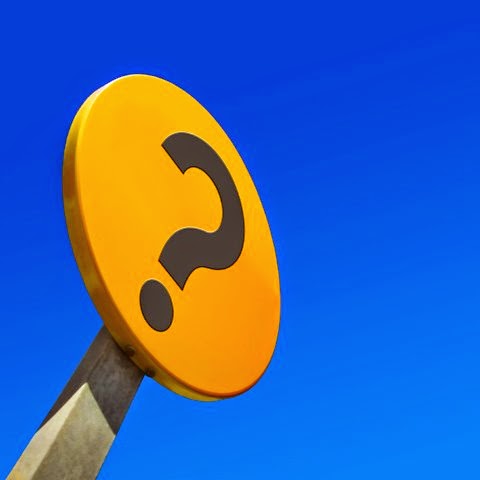 Question: We have a lot of great nonprofit organizations in our city that do good work. Can the city make donations to them to help accomplish their goals?

Answer: While nonprofits often provide an important public service, there is not general authority under state statute to make donations to organizations based on their status as nonprofit. There are specific provisions that allow for contributions to be made to:

Artistic Organizations—An “artistic organization” is an association, corporation, or other group that provides an opportunity for people to participate in the creation, performance, or appreciation of artistic activities.

Chamber of Commerce—State law authorizes cities “to appropriate not more than $50,000 annually to any incorporated development society or organization of the state for promoting, advertising, improving, or developing the economic and agricultural resources of the city.”

Food Shelf—Any city may appropriate an amount to provide grants to nonprofit organizations that operate community food shelves and provide food to the needy without charge.

Prevention of Cruelty to Animals—If a city contains a society for the prevention of cruelty to animals (SPCA), it may appropriate for the maintenance and support of that SPCA “in the transaction of the work for which they are organized” any sum of money not otherwise appropriated. However, no part of such an appropriation may be expended for the payment of the salary of any officer of the society.

Another option for the city is to use their general contracting authority to make a donation to an organization for providing a service. An example of this could be the council contracting with a club to spend a Saturday cleaning up public grounds in exchange for money. In this example, the city would normally have to spend funds on the park cleaning but instead of using city staff, they have contracted with the club to provide the service.

Lastly, if a city maintains a fund created from gambling proceeds, those proceeds may be used for many types of charitable contributions.

Written by Amber Eisenschenk, staff attorney with the League of Minnesota Cities. Contact: aeisenschenk@lmc.org or (651) 281-1227.

Question: How long should a city hold on to recordings of closed meetings?

Answer: Cities must close some meetings. Other times it’s a choice to close that door. But a closed meeting—except one closed under the attorney-client privilege—must be electronically recorded by the city. Three years is the time to keep that record collection, as a general rule.

Seems simple right? But look here. The amount of time you must keep an electronic recording sometimes changes depending on why a meeting is closed.


Remember, it’s best to consult the city attorney before a city council closes a meeting. Close those doors with care.

Written by Jeanette Behr, research manager with the League of Minnesota Cities. Jeanette's favorite vinyl is "Dock of the Bay" by Otis Redding. Contact: jbehr@lmc.org or (651) 281-1228.


This blog post conveys general information. It’s not legal advice. Please check with your city attorney before acting on this information.

Taking Time to Look at the Big Picture in St. Anthony Village

St. Anthony Village city officials recently gathered for an off-site strategic-planning session. The two-day meeting is an annual ritual that allows city officials to get away from the daily grind and
focus on the big picture. 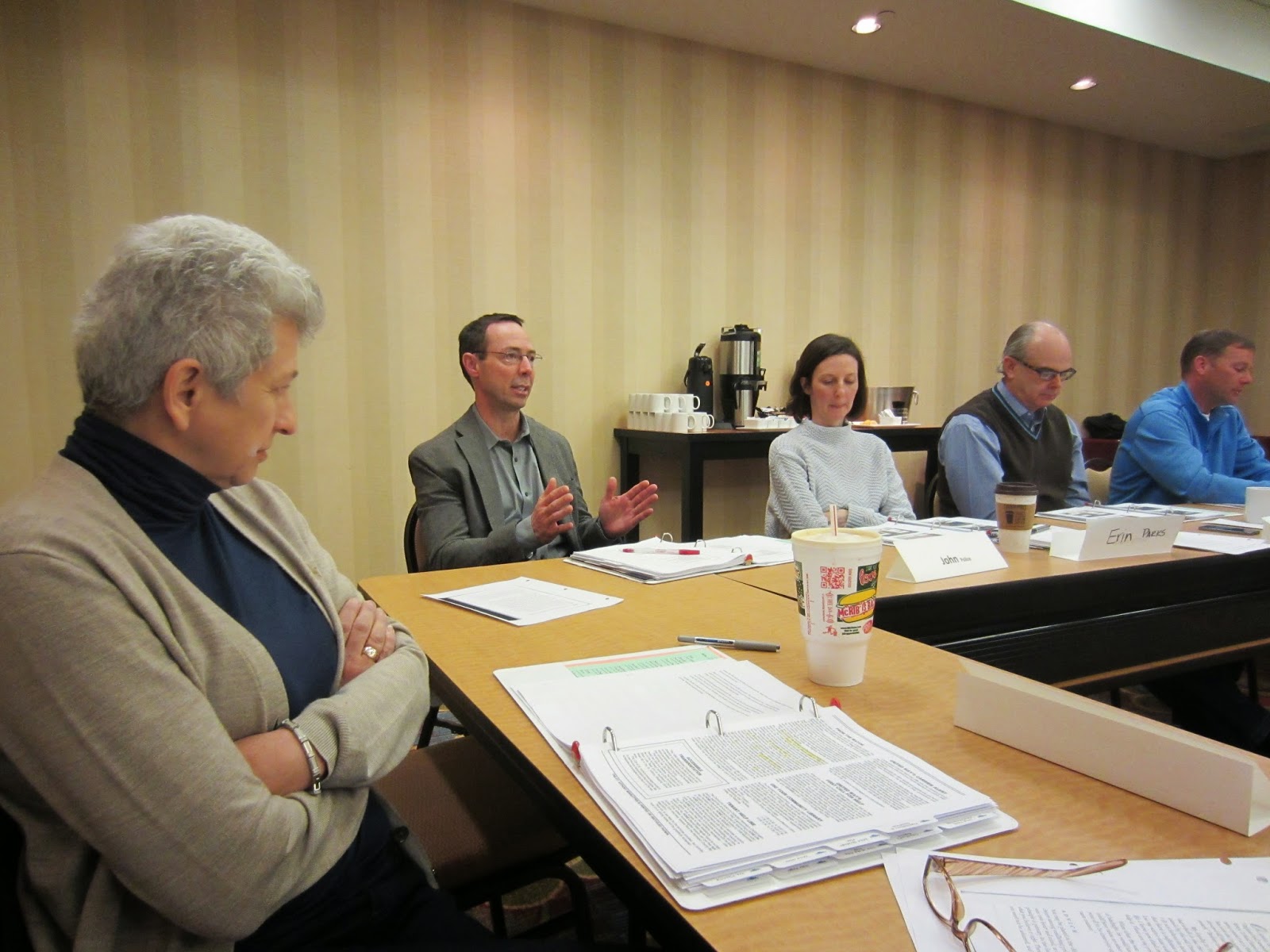 The ritual actually dates back to the 1980s, said Mayor Jerry Faust. The first day includes the mayor, councilmembers, city manager, city clerk, department heads, some commission members, consultants, and a few guests. They review last year’s strategic plan, the progress the city made toward achieving goals, and then brainstorm ideas for new goals. On the second day, the mayor, councilmembers, city manager, and department heads create the strategic plan for the current year based on the previous day’s discussions. 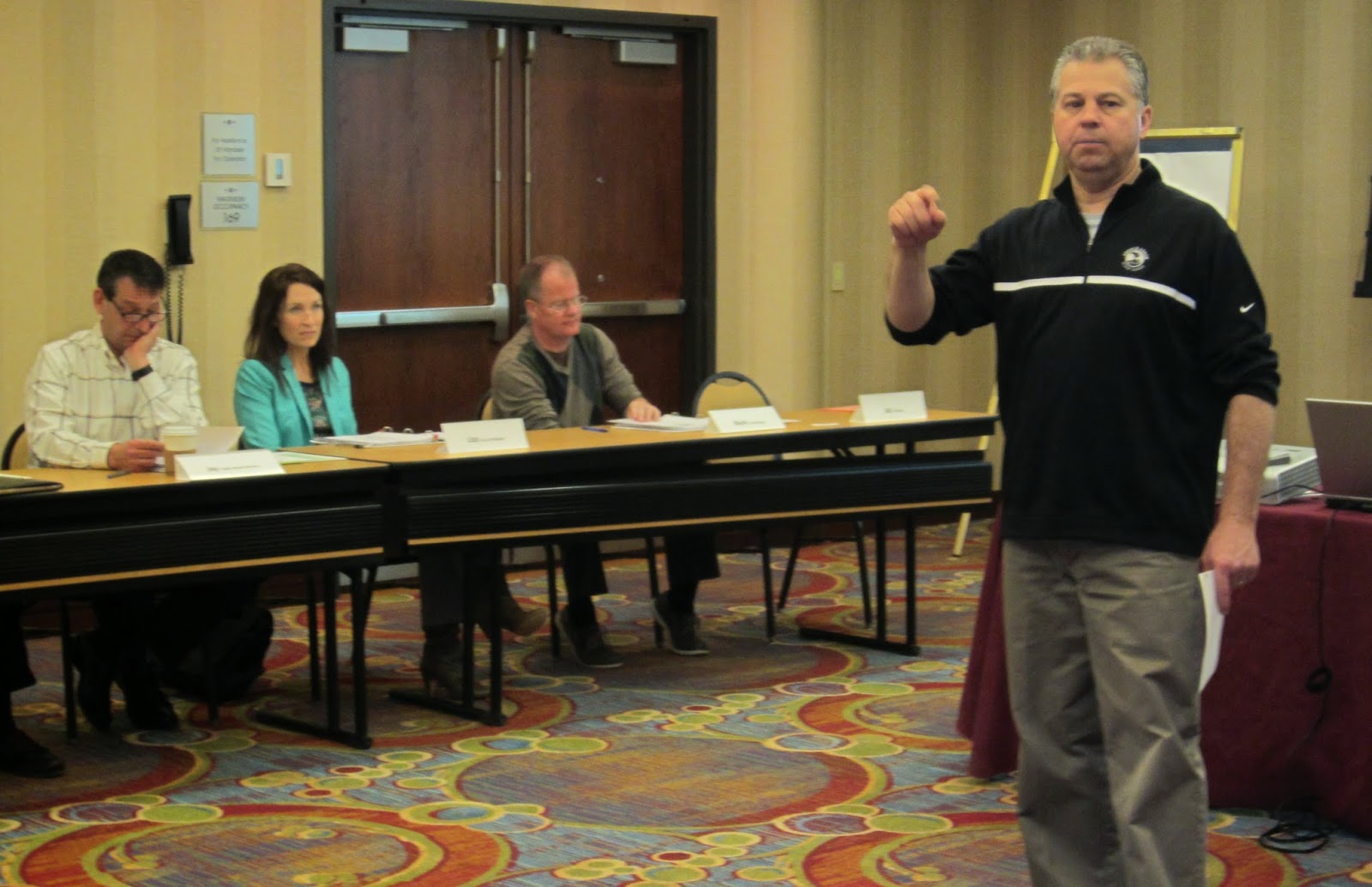 While the purpose of the session is to check progress on previous goals and to establish new ones, it’s not all serious discussion. Faust said the city tries to keep the meeting light so that people feel comfortable and will engage in the process. “The social aspect is just as important as anything else,” he said. “We work together better when we get to know each other as people.” 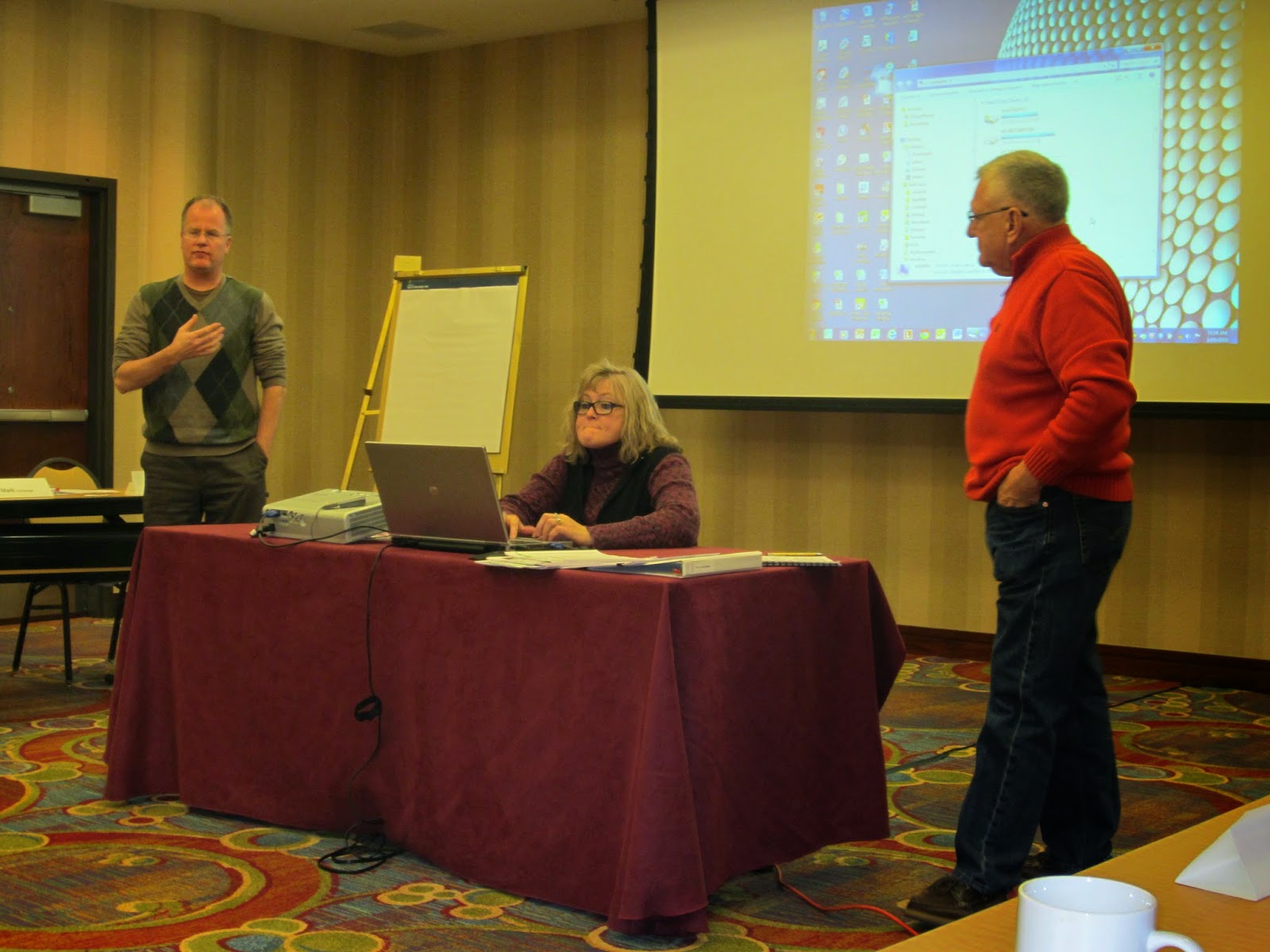 Springsted Consultant Dave Unmacht, who has facilitated the session for several years, sets the tone for a casual and fun meeting by leading light-hearted banter among attendees. All kidding aside, though, the goal-setting meetings have resulted in major improvements for the city that might not have happened without these discussions.

The pyramid has the city’s mission at the top, then the vision, and then in the wider part of the pyramid, it contains the strategic initiatives, goals, and action steps. (see the 2014 pyramid below). After the session, the pyramid is shared with residents through the city newsletter.

Goals accomplished last year included negotiating and signing a contract with local haulers for organized garbage collection, installing a local area network for the city’s internal communications system, and reducing paper and adding space by moving many records to electronic storage. As for 2015, stay tuned!

Learn more
Think your city would benefit from strategic planning? Read a recent Minnesota Cities magazine article to learn more about it: Strategic Planning: Building a Roadmap to Success. 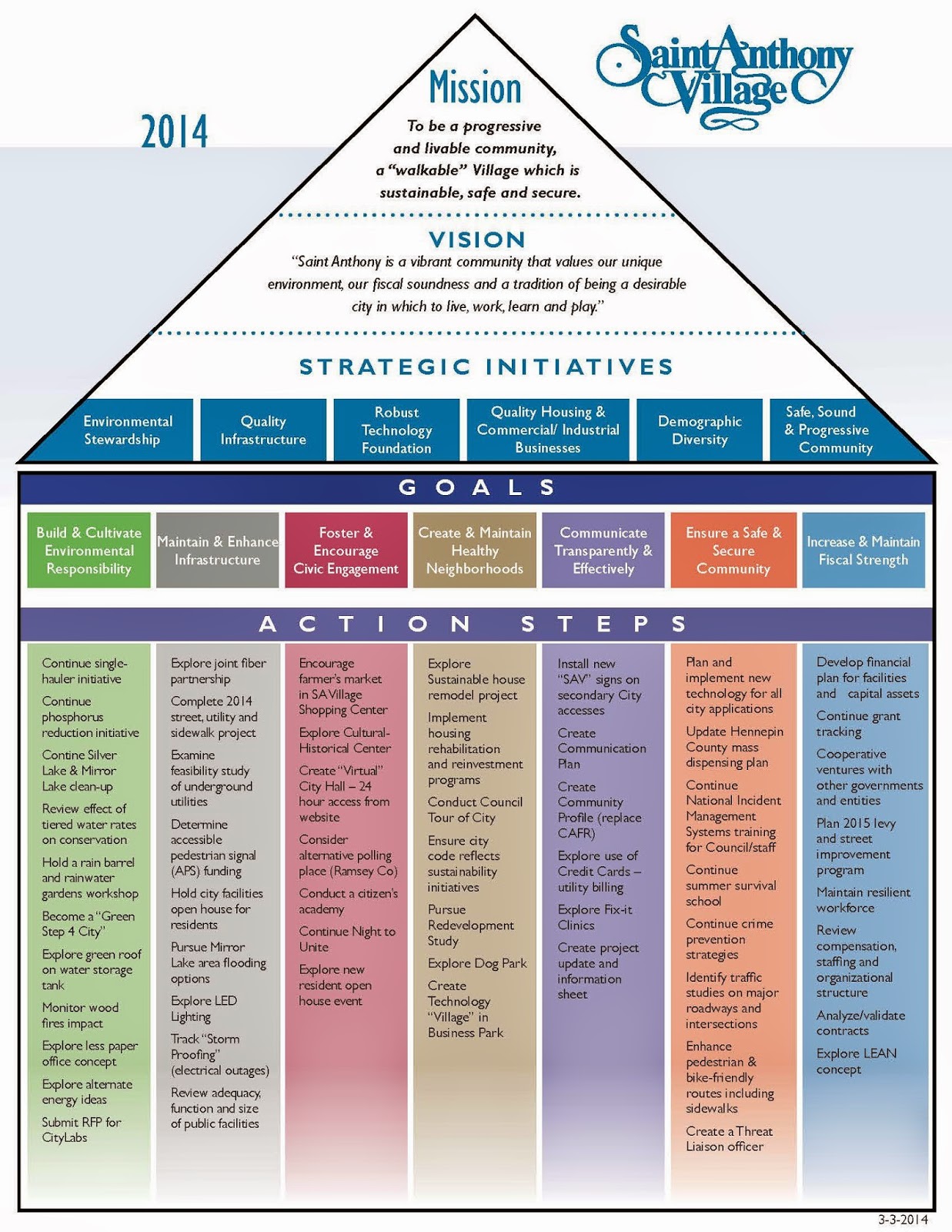 Question: Do you have any info on the origins of my city's name?

Answer: Did you know that you can get quick access to the story behind your city’s name by searching Minnesota Place Names, a geographical encyclopedia available through the Minnesota Historical Society’s website? This resource was created by Warren Upham, who has been described as “a compulsive collector of minutiae who gathered Minnesota’s geographic names from 1879 until his book was first published in 1920.”

For example, here’s the name story for the city of Ada—the first city listed in the League’s City Directory. (We at the League love all Minnesota Cities equally; so I used a neutral method to choose two cities to highlight.) The city of Ada was named in honor of a daughter of William H. Fisher of St. Paul, who was an attorney and the superintendent of the St. Paul and Pacific Railroad. Ada Nelson Fisher was six-years old when she died in 1880, and the city was named after her to perpetuate her name and memory.

And here’s the name story for the city of Zumbrota. Yes, you guessed it—Zumbrota is the last city listed in the City Directory. The city of Zumbrota was the site of the 1857 Zumbrota Covered Bridge, the only covered bridge in Minnesota at that time and the first bridge built over the north branch of the Zumbro River. According to Minnesota Place Names, the Zumbro River’s name is derived (after changes of pronunciation and spelling) from an early French name meaning River of Difficulties or Encumbrances.

This blog post conveys general information. It’s not legal advice. Please check with your city attorney before acting on this information.
Posted by MNCities Blog at 10:02 AM No comments:

The city of Aquachickenopolis recently garnered rave reviews from League staff for its efficient city services and placemaking amenities. Never heard of it? That's because it doesn't exist—yet. 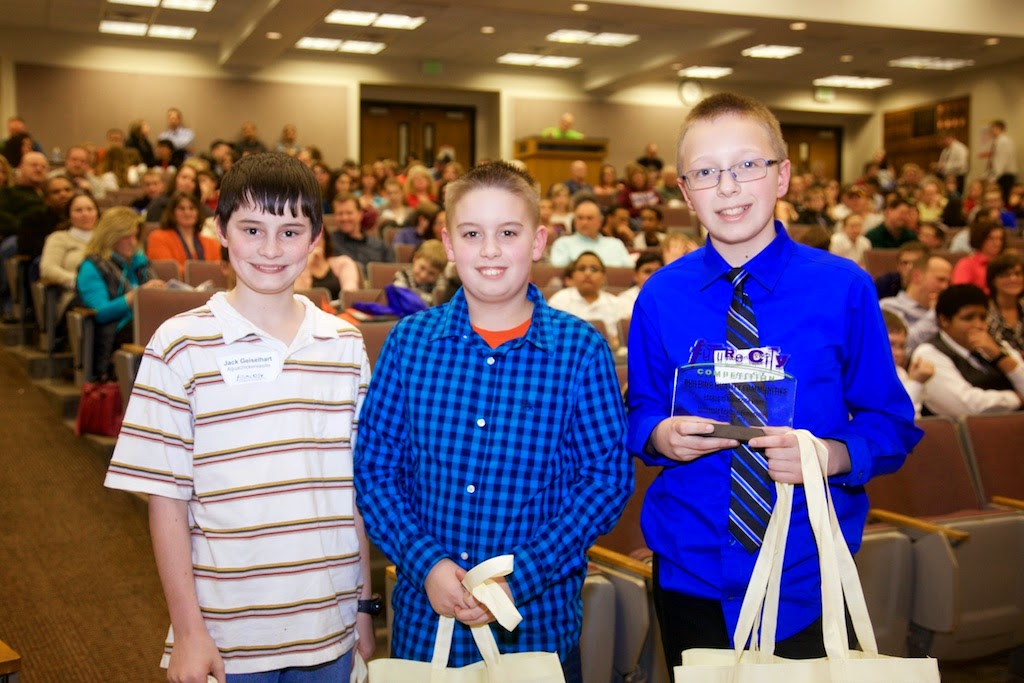 Aquachickenopolis, the vision of students from Dodge Middle School in Farmington, was the winner of the "Building Quality Communities" special award at the 2015 Future City Regional Finals held in January.

LMC is a co-sponsor of the Future City program and the Building Quality Communities special award.

Teams of 6-8th graders from across the state brought their best and most imaginative city models to the University of Minnesota for a day of presentations and judging. League staff attended to review entries for the special award, and to choose a winner that demonstrates how a city government can improve the quality of life for its citizens.

What did we love about Aquachickenopolis? A centrally located city hall. Services distributed throughout the city. An industrial port being used for economic development. Great placemaking features like sports fields, a museum, and public transportation. Clean energy.

The group of 6th-grade students behind Aquachickenopolis were all first-timers to the competition, according to Dodge Middle School's Future City mentor Kristin Ammerman.

Ammermen said she was impressed by how well the team worked together, and described Aquachickenopolis as both "functional and aesthetically pleasing."

We agree. Great job to all the students who presented their projects at this year's finals. We're already eager to see what next year's competition brings.

See who won the Building Quality Communities special award in 2014

Posted by MNCities Blog at 10:13 AM No comments: