It was June of 1963. The League of Minnesota Municipalities was in the midst of its golden anniversary, and the country at large was in the flux of social change.

Civil rights leader Martin Luther King Jr. had recently penned his “Letter from a Birmingham Jail,” and Birmingham, Alabama’s Commissioner of Public Safety had responded to peaceful protests by authorizing the use of fire hoses and dogs on African-American demonstrators.

At the League’s Annual Convention in Mankato, Gov. Karl Rolvaag delivered a passionate speech addressing the role of local government in fighting discrimination.

He explained that while Minnesota’s race relations had not been splashed across national headlines, that was “no reason for us to become complacent.”

“There is a little bit of Birmingham, Alabama, in every city and town throughout America,” he said.

Rolvaag made a call for local government to become a leader in protecting civil liberties of citizens, regardless of skin color, and noted that 1963 was coincidentally also the 100th anniversary of the Emancipation Proclamation.


“I sincerely believe that what we, at the state level, can contribute to the cause of equality, is meager compared to what can be accomplished when local governments resolve to maintain and uphold the law.

“For as local government is closest to the people, so also is it the most promising vehicle for achieving sorely needed social adjustments with a minimum of conflict.”

One example Rolvaag provided: Minnesota had a law requiring a non-discriminatory hiring clause in all public contracts dating back to 1941, but only recently had Rolvaag signed an executive order to enforce the neglected statute at the state level.

He said it was the duty of all public officials to ensure this non-discriminatory hiring clause was included in all public contracts and enforced.

In closing remarks, Rolvaag reminded the audience of city officials that meeting the challenge before them would fulfill their public trust and lead to better local government in the years and decades to follow.

“I am genuinely optimistic concerning that future and of the judgment our descendants will make of us and of our times,” he concluded.

Did Rolvaag get it right? How does his message resonate today? Tell us what you think in the comments.
Posted by MNCities Blog at 8:30 AM No comments: 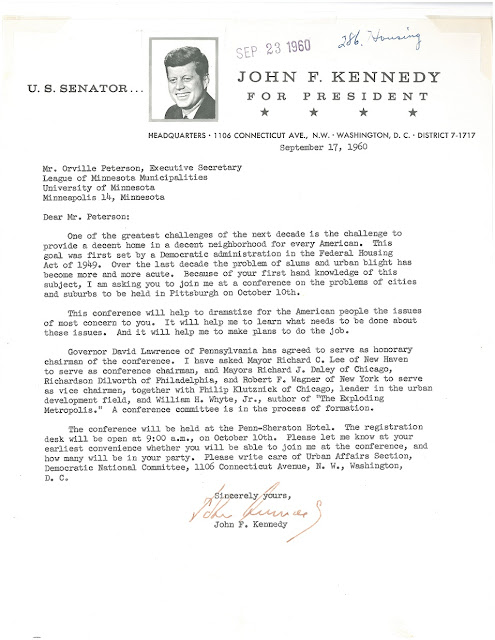 File this in the “treasure” category. Once upon a time in the mid-1980s, some League staff members were cleaning out old filing cabinets in the office. A thankless job for sure, until one of the administrative assistants stumbled across this letter (shown above) from Senator John F. Kennedy.

In the letter, JFK invites League Director Orville Peterson to an urban renewal conference in Pittsburgh that fall of 1960.

But beyond the mere existence of this letter from our then soon-to-be-elected 35th President of the United States, we have a few unanswered questions.

Why was Orville invited to the conference? Was it because of the Minnesota League’s affiliation with the National League of Cities? Was it just a generic invitation to state municipal league directors? Or was it somehow politically motivated since the federal election was that same year? Finally, did Orville actually attend the conference, and—if so—did he have the chance to meet JFK?

None of us currently at the League of Minnesota Cities knows any of these answers for certain—but we are immensely grateful to whomever saved this piece of history for all of us to enjoy.
Posted by MNCities Blog at 7:49 AM No comments:


When you've been around for 100 years, seeing styles come and go is just part of the gig.

The cover of Minnesota Cities magazine, formerly Minnesota Municipalities, is certainly no exception.

What started out as a bi-monthly publication in 1916—25 cents a copy—has undergone several redesigns. (These are just a few of them!)

Now in 2013, the magazine will be debuting in full color in the May/June issue, along with more community voices and fresh, reader-friendly features.

Meanwhile the on-point city issue coverage and the good research that goes into each page will remain the same as it ever was. What do you call that? Classic.

What issues were city officials reading about when the magazine was launched in 1916?  Find out in last Wednesday's post.
Posted by MNCities Blog at 7:30 AM No comments:

It was February of 1916, and the League of Minnesota Municipalities made magazine headlines, literally, with the debut of their new publication.


The League's Minnesota Cities magazine is prepping for a new look debuting in the May/June issue! View covers of the magazine from decades past in our special Friday post this week.
Posted by MNCities Blog at 8:00 AM No comments:

A Minnesota First: Q & A with Craig Morris

February is Black History Month. We recently talked with Minnesota’s first African-American mayor, Craig Morris, who served the St. Croix River Valley-city of Lakeland (population 1,796) for more than a dozen years. He shares what holding this distinction means to him, what his greatest challenges and accomplishments were as mayor, and how the League helped his city.

When you were running, did you know you might become the first black mayor in Minnesota?
I did not. It was not even a consideration. I learned about this after the election, when I was informed by the media.

What did that mean to you?
When I learned of this fact, I was taken aback. It was 1986 in the state of Minnesota. My initial thoughts were not about me, but rather me questioning “why it had taken so long.” I didn’t want to be the first because I anticipated additional expectations would be placed on me. I had never held this office and wanted to focus on those matters only, not also being the first of something.

My concern was that as an African-American mayor, that others might be judged based on me, what I did, and how I performed. However, soon after the election when I realized how others had embraced the significance of my election, I quickly felt a profound sense of a greater need to do well.

A few years later, Sharon Sales-Belton and Dr. Jean Harris were successful in their own mayoral pursuits, for Minneapolis and Eden Prairie, respectively. I would like to think my election may have caused some thought on the part of others to consider running for public office. I hold this today, for more people regardless of their gender, ethnicity, and alike should be more involved in seeking a local office, predicated on what they know, willingness to serve, and what they can accomplish.

What made you decide to run for mayor?
The motivation for me was a sense of duty to the community and wanting to ensure that we had leadership and accountability in this office. My wife and I moved to Lakeland in 1979, had a young family, and we wanted to help in any way that we could, because of the great opportunities in the St. Croix Valley.

Do you remember any particular dealings you had with the League and how they were helpful to you as mayor?
My first encounter with the League was indirectly through an instructor I had while attending the University of St. Thomas. Mr. Gene Ranieri was an adjunct faculty member who conducted two of my classes while employed as a lobbyist with the League. Thus, he represented the League to me and was a great friend and mentor, even prior to my involvement in local government.

I also had interaction with the League as I served on community committees prior to holding an elected office. After my election, the League was a superior technical and administrative resource, policy advisor, legal advocate, and lobbyist for our municipality. The League was crucial to us, especially given our city’s small size and limited staff resources. The League’s direction and advisement was always well received and accurate with regard to property, litigation, zoning, and staff-related matters.

What were your greatest challenges as mayor?
Most people don’t realize that as mayor, there is a narrowly defined scope of duties and responsibilities. Serving the office within that scope can sometimes frustrate people who think a mayor has more power than he or she can actually wield. Cities do not have unlimited powers—and the same holds true for its mayors. Explaining to people about what we could and could not do was sometimes challenging. We wanted to help, but could not always rise to their expectations.

Also, not many people realized then that between 1960 and 1980, Lakeland doubled it housing stock. Our city’s population rapidly expanded, and the need to address infrastructure and services was not meeting the expectations of both the established older community members and the newer community members. This made for many interesting meetings in council chambers.

What were your most satisfying moments as mayor?
It may sound cliché, but I really enjoyed hearing from people about ways to make our city stronger and more attractive, as well as to protect and preserve the integrity of our neighborhoods from a safety, sanctity, and solitude perspective. Working to resolve these problems was important to me.

Serving in public office was instilled in me at an early age, as my family historically established a number of firsts in both St. Paul and Red Wing, Minnesota. Since I had the opportunity to meet, work, and learn from leaders at the national level in the 70’s, I always had a sense of duty. Serving as mayor afforded me the opportunity to practice the likes of which I had learned.

I was also able to help shape a stronger sense of community and alignment amongst the lower valley cities. Collaboration on joint services and forthrightly addressing one of the most significant groundwater contamination problems in the history of our state was important, because it mattered to others. We were able to make changes to the Superfund Law and redirect funds that resulted in the deployment of our water system in less than three-and-a-half years from the time we were notified of the problem, until we began construction on our system.

Is there anything else you’d like to add?
One cannot do this by themselves. There were—and remain today—many great people in the community, who encouraged me, endorsed me, and supported me, along with my family. Without these people I could not and would not have sought office. I will be forever grateful and humbled by their kindness and support.
Posted by MNCities Blog at 7:14 AM No comments: