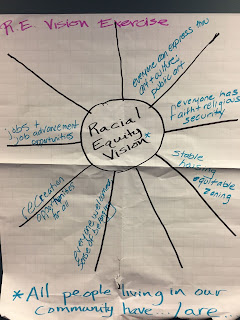 City officials from several southwestern Minnesota cities (and Shakopee!) came together over the last year to commit to advancing race equity in their communities.

They gathered once a quarter in person at the Redwood Falls Community Center, and participated in regular calls and webinars in between meetings.

The high school students who frequent the Community Center only thought of the group as the people who gave them leftover donuts, but these city officials were working on so much more!

The League has partnered with the Government Alliance on Race and Equity (GARE) since 2016 to support cohort programs of city officials learning about race equity and developing race equity action plans.

Very much aware that the GARE model is best suited to larger jurisdictions, the League put out the call to smaller cities in the southwestern portion of the state to join in a modified version of the program. The goal was to supplement quarterly in-person gatherings with online discussions in order to lessen the demand for time away from the office.

Marshall, Pipestone, Monticello, Luverne, Fairmont, Willmar, and Shakopee sent teams. Since the participating communities had smaller staff sizes and might find it difficult to designate someone who could be trained to lead employee workshops, League staff also offered to lead an introduction to race equity workshop for city employees as part of the cohort program.

Over the year-long program, Gordon Goodwin of GARE lead the group through interactive sessions on normalizing conversations about race, exploring the history of race in a given community, setting goals around race equity, and spelling out action plans designed to build racial equity. The sessions were casual and centered on team-to-team sharing of experiences, questions and insights. While the content was similar to the previous cohorts that LMC and GARE co-hosted, many of the conversations centered on what it was like to do this work in a small community. Several participants pointed out that they felt called to do this work because they interact so closely with residents in their communities — seeing each other at ball games and at the grocery store, for example.

Some of the things that these cities are looking at in their race equity action plans include athletic field use policies, housing ordinances, and overall strategic planning. The team members have been added to the network of city officials who convene quarterly at LMC to share their race equity work with each other.

Congratulations to this cohort for your work this year. We can’t wait to see what lies ahead for your communities as you work toward eliminating racial inequity in city operations!