The Sep-Oct Issue of Minnesota Cities Magazine Is Now Online 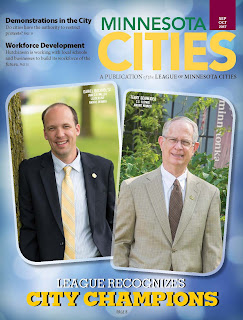 Kick off the fall season with a great read—the Minnesota Cities magazine! The Sep-Oct issue covers stories on local leaders and city projects as well as relevant state and nationwide topics.

Have you ever thought about using a drone to capture images, videos, and information on your community? The cities of Red Wing and Champlin have done it! Both cities took advantage of drones to help craft their plans for upcoming city projects. Find out all the benefits drones have to offer in The Bird’s-Eye Advantage of Using Drones.

A revival of protests around the nation and here in Minnesota has many city officials asking, “How should I handle this?” This issue's Letter of the Law column can help clarify what local leaders need to know about preserving public safety as well as freedom of speech.

Other highlights include LMC Executive Director David Unmacht’s tips for acing interviews, a look at how city officials are advancing racial equity in their communities, and how Hutchinson is addressing a skilled workforce shortage.