The Life and Times of Buzz Olson, Fictional Mayor of Mosquito Heights


Back in 1992, LMC communications staffer Tim Busse* was charged with the task of producing an informational video that could be used during the League’s Regional Meetings.

As he recalls, “That year the topic of the video was city finances—some things never change—and we did it as a straight-up report. We had a talking head on the steps of the Capitol, interviews with city and LMC officials, charts showing city spending trends, etc. It was informative and well done, and it was the most boring thing ever put onto videotape.”

So the next year, Tim knew something had to change. Liking the medium but wanting to jazz things up a bit, Tim switched the format of the video. This time a “Nightline” set-up (renamed “Sightline”) was used, complete with host Ned Koppel asking questions of a panel—one of whom was Buzz Olson, mayor of Mosquito Heights.

This fictional mayor from a fictional Minnesota city soon took hold and became the star of a popular video featured at Regional Meetings for many years. Buzz and his crew (including regulars like Willie the Intern, Councilmember Gultch, and Councilmember Bertelsen) used their campy and sometimes kooky theatrics to cover topics like the Open Meeting law, succession planning, and the Y2K bug in Mosquito Heights, a locale meant to represent municipalities of all shapes and sizes.

For example: when the city dealt with staff turnover (featured in the video clip above), they forgot to ask the retiring public works director what size light bulb fit at the top of the water tower—so they sent their long-suffering intern, Willie, up the giant ladder to find out. In another video, the value of a good joint powers agreement is illustrated through an attack by feral cats at a “C” league softball game in neighboring Pleasant Valley.

Of the early years, Tim remembers that “LMC staff observed that people seemed to enjoy the video more if they partook in the social hour first,” so the viewing was always scheduled following drinks and dinner. Additionally, a real-life Minnesota mayor (who shall remain unnamed) was frequently designated as the “laughing guy” in the audience during the videos to help warm up the crowd.

For 16 years, these tongue-in-cheek productions taught members something important while still having some fun. And during that time, Buzz’s influence even extended beyond our own state’s borders. The National League of Cities distributed at least one of these Mosquito Heights videos, and the Texas Municipal League copied the idea to create their own version—aptly named after the fictional city of Armadillo Flats.

*Tim Busse left the League in 1997. He has been a councilmember for the City of Bloomington since 2011, and says his days producing and starring in the Buzz Olson videos helped prepare him for his role with his city.

Posted by MNCities Blog at 9:37 AM No comments:

A robust League tradition, member-driven policy committees, kicks off for the hundredth year this week. And we're not even tired yet!

We look to our statewide membership to direct the agenda for our legislative efforts by way of these policy committees. (View the latest City Policies document here) It's something that distinguishes us from some other organizations, and has been a standard practice since the League's inception.

In fact, a legislation committee is called for in the very first League constitution, drafted August 21, 1913 in the reception room of then-Mayor of Minneapolis, W.G. Nye. The legislation committee of 1913 would be composed of three members, and two ex officio seats would be held by the board president and League secretary.


The next year, the number of members was quickly expanded to 13 to accommodate the demanding task.

Now, more than 150 city officials will participate either in person or via GoTo Meeting online.

In addition to composition, the process has also been revised several times since 1913. Committees of the past have met in the spring and presented their priorities before the membership body at the Annual Conference for review and revision (a raucous and time-consuming process at times).

These days, policy committees meet over the late summer months, put their work before the board and the full membership for a comment period, and then bring these policies to the board for final approval. Then these carefully crafted messages are sent off with our intergovernmental relations staff into the fray known as the legislative session.

These working groups, firmly woven into the League's fiber, continue to be a shining opportunity for members to get involved and improve the landscape for city officials and the residents they serve.

Email advocacy@lmc.org or call (651) 281-1256 for more information about getting involved in a committee.

Posted by MNCities Blog at 3:03 PM No comments:

Who knew celebrating a centennial would involve so much ... dirt? And sunscreen, and shovels ...

Let's back up a bit.

As part of the League's centennial celebration, staff decided last winter to also plan time to give back to the community we are a part of here in the Frogtown neighborhood of St. Paul.

And so with the help of the Blooming St. Paul program, about a dozen League staffers rolled up their sleeves last week to dig out an overgrown, weedy garden at the nearby Scheffer Rec Center, which provides programming and recreation for children. (See the "Before" photos here!)

In place of the weeds, a new landscape design was planted that would incorporate the recently installed mosaic bench and Little Free Library at the site. Stone steps from the St. Croix River Valley were used to allow kids at the rec center to access the bench without trampling the garden-a-growin'.

A few of St. Paul's Youth Job Corps members completed the garden with plenty of water and mulch.

While some of the plants are starting off small (hey, didn't we all?) in just a few years the garden will mature into both a shady spot to relax and a sunny bed for plants to soak up the summer sun.  It's versatile, resilient, and ready for the future—just like Minnesota cities! 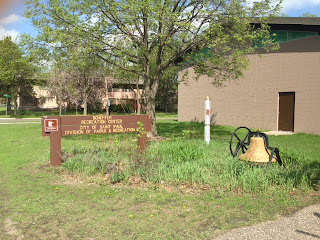 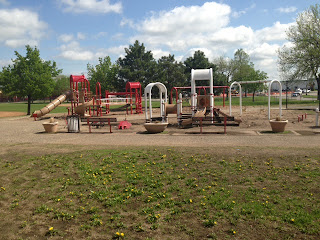 Over at the Scheffer Rec Center located in the Capitol Heights neighborhood of St. Paul, there are plenty of things for kids to do during the summer time, and a few weeds too.

Down the street at the League of Minnesota Cities building, an idea to plant a garden in honor of our centennial  blossomed *ahem* over the winter and spring. But where to go?

All it took was a "matchmaker" over at Blooming St. Paul to take our idea and put us to work improving the garden bed at our Rec Center neighbor.

Bad news for those weeds!

It turns out cities have been investing a little sweat equity into public gardens for quite some time. The June 1917 magazine issue of "Minnesota Municipalities" lists projects throughout the state dedicated to reducing the "high cost of living" by allowing residents to plant gardens on public land. 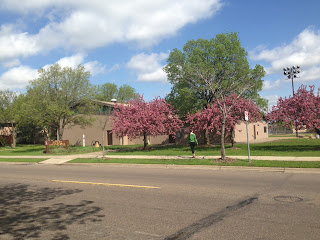 "... Menahga has broken up the ball park. Will irrigate gardens with city water.

Scanlon water works irrigates gardens free all summer. And every foot of ground is cultivated.

the season, but we're just as excited to see blossoms and well-tended greenery for years to come. It could be a match made in heaven!

Check back next week when we post the "after" photos!

Posted by MNCities Blog at 3:18 PM No comments:

The Man, The Award, The Legacy 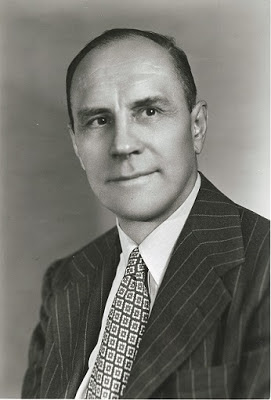 Having served as executive director of the League from 1935 to 1958, Ludwig was described in a Minnesota Municipalities article as having had “rock-ribbed integrity, firmness and persistence in what he believed to be right, qualities of leadership, and a kind and generous spirit.” Shortly after his death, an award was created by the League to honor him.

Established in 1962, the C.C. Ludwig Award is given annually in celebration of outstanding service by city officials in Minnesota. Recipients are chosen for their vision, statesmanship, and unwavering commitment to the public good—factors exemplified in Ludwig’s own life.

The first-ever C.C. Ludwig Award recipient was Leonard Thompson, a manager with the St. Paul Water Department, who had 50 years of continuous municipal service. According to his nomination form, Thompson “supervised development of one of the most adequate and efficient water systems in the nation,” had served as past president of the American Water Works Association (AWWA), and himself has an award named after him at the AWWA.

Back when the award was initially established, the Executive Committee “believe[d] that the C.C. Ludwig award will soon become a great honor.”

That founding committee would be pleased to know that both the force of Ludwig’s personality and appreciation of his contributions live on today. One recent recipient said that the award “is widely acknowledged as the gold standard for elected municipal officials in Minnesota.”

Do you know someone of "rock-ribbed integrity" that you'd like to nominate for a Ludwig or Leadership award? Find award nomination info on LMC's website.

Posted by MNCities Blog at 8:14 AM No comments: