It's the most wonderful time of the year—for political junkies, that is. That's right, the legislative session is underway at the State Capitol.

League archives show that while every session has its own flavor (stadium bills, anyone?), there are some things that never change when it comes to lobbying on behalf of cities.

The League's intergovernmental relations staff compiled this list of the top issues that have been consistently vexing city officials—and keeping lobbyists on their toes—for the past 100 years. (As for flying cars and x-ray glasses, better luck next time.)

Want to learn more? Legislative goals for the 2013 session are available on the League's website.

Posted by MNCities Blog at 7:00 AM No comments:

Trust Us, We've Got You Covered (LMCIT) 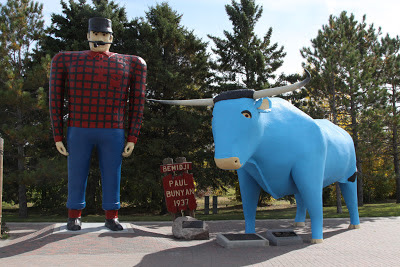 Q: What do Paul Bunyan and Babe the Blue Ox in Bemidji, $1 million-worth of roses at Virginia Clemens Gardens in St. Cloud, and the historic Burwell House in Minnetonka all have in common?
A: They are all insured by the League of Minnesota Cities Insurance Trust (LMCIT)

Hey, somebody needs to provide coverages for the roadside attractions and historical treasures in Minnesota’s cities so they’ll be here for future generations! These are just a few examples of what LMCIT provides ... but there’s more to the story.

While it’s difficult for some to remember the days when cities had trouble finding reliable and stable coverage, there was a very tough period in the mid-1970s when cities were really struggling with volatility and unpredictability in the private insurance industry. In fact, there was only one private insurer that would even insure cities, and our members were complaining about 200 percent and 300 percent premium increases.

Enter the League of Minnesota Cities Insurance Trust. Founded in 1980, LMCIT was one of the first municipal self-insurance pools in the country. Rather than paying premiums to a private insurance company, members contribute premiums to a jointly-owned fund—and these funds are then used to pay for members’ claims, losses, and expenses. Today, LMCIT provides property, liability, workers’ compensation, and employee benefits solutions.

Because the Trust exists solely for Minnesota cities, it is able to develop new programs to address unique city needs when they arise (like open meeting law defense cost reimbursement and PTSD coverage for firefighters)—that private insurance companies may not.

Learn more about LMCIT here–and stay tuned to this blog for a Q&A with LMCIT Administrator Pete Tritz, coming in May!

Posted by MNCities Blog at 8:19 AM No comments:

Price Was Right: How the League Came to Be


By now, you’re probably well aware that the League of Minnesota Cities was formed in 1913. But did you know the organization almost never came to be?

Right after the turn of the 20th century, two organizations similar to the League had been formed—and both failed. But thanks to the tenacity of Dr. Richard Price (and a push by St. Cloud City Attorney John Jenks), the third time was the charm.

A professor at the University of Minnesota, Price greatly believed in the concept of an organization like ours. So when Jenks contacted him about starting a state municipal league in Minnesota, Price took what he had learned in creating the League of Kansas Municipalities and went to work.

On August 21, 1913, he persuaded the mayor of Minneapolis to gather his colleagues for a conference—and the League was born! A second conference was held later in the year with more than 100 delegates.

We maintained our ties with the University of Minnesota until 1974 (more on that in a later post), at which point the League became an independent organization.

While much has changed over the last 100 years, one thing has always remained the same for the League: we are here to serve you, our member cities.

And we will continue to advocate for you at the Capitol, offer training opportunities to help you become a better city leader, guide you through challenging municipal issues, and provide risk management and insurance support.

Read more—and watch an “introduction to the League” clip—for all of the ways the League of Minnesota Cities is here to help your community!

Posted by MNCities Blog at 7:32 AM No comments: 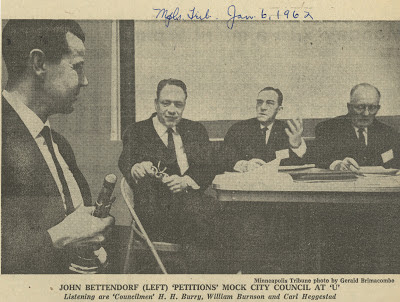 “Let’s get this show on the road,” the mayor said as he opened the council meeting (without a quorum). “I want to get home and watch the fights.” After an hour, he and the four councilmembers left (without adjourning the meeting).


This mock “council meeting” was held in 1962 as part of a one-day League training session (and documented in the photo above courtesy of the StarTribune). Newly elected mayors and councilmembers in attendance were urged to spot the errors in the mock meeting, including out-of-order remarks and unseconded motions that passed the council.

Can you imagine? That training was probably a hoot. But in addition to the laughs, members walked away with memorable lessons to bring back home to their new council chambers.

The League continues to offer leadership training for newly elected officials in January and February—though maybe not with as many 1960s hijinks. Experienced city officials can also hone their leadership skills at their own yearly conference, this year with a special focus on managing the “three-ring circus” of strategic communication. Register for these trainings and more throughout the year on our website.

Whether you’re the ringmaster of city communications or preparing to be the lightweight champ of Robert’s Rules, you’ll leave with a smile and the extra skills you need.

Posted by MNCities Blog at 5:00 AM No comments:

100 Years of Service: A Welcome Message from Jim Miller


Please note: if you are using Internet Explorer, you may have to refresh the page to view the video.

Please bookmark this blog and enjoy a new post every week during our centennial year. We'll walk down memory lane, discuss what we're doing now, and look toward the future.

This centennial celebration is truly for all of you, our member cities, who have made this milestone possible. So let’s have some fun!

Posted by MNCities Blog at 8:14 AM No comments:

A wise man once said that the whole is greater than the sum of its parts. When it comes to the state of Minnesota (the whole), though, we’re not so sure about that—we think our cities (the parts) are pretty darn great.

So in the spirit of celebrating both, here are some fun facts and bite-size knowledge about Minnesota and our cities from over the last 100 years. ...

Q: What is the oldest city in Minnesota?
A:  It’s a tie! Stillwater and St. Paul were both the first cities to be incorporated in Minnesota Territory on March 4, 1854.

Q: What is the newest city in Minnesota?
A: Nowthen, incorporated in early 2008. Speaking of now and then...

We are a state of small cities! Seventy-four percent of Minnesota cities today have populations of 2,500 or less.

Do You Know Where it All Began? 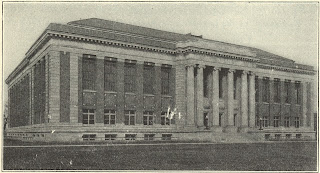 Everyone begins somewhere, and the League is no exception. Do you recognize the site of our first location? (Take a guess by following these instructions to post in our comments section ... we'll post the answer later this week!)

Tell us what you think of our blog! Do you have a comment? Would you like to venture a guess on one of our trivia questions?

You can do so by clicking the "Comments" link at the bottom of any given blog post. Then just enter your comment in the box provided, and choose an option from the "Comment As" dropdown menu.

The easiest categories to choose in the "Comment As" menu are:

We can't wait to hear from you!